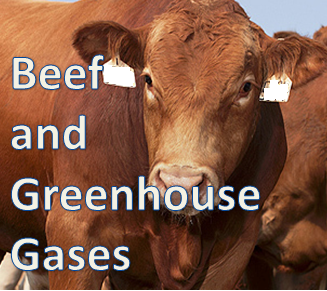 A comprehensive study by ARS (Agricultural Research Services) on the environmental footprint of beef life cycle in the US was completed. The study concluded that cattle convert feed to food as efficiently, as pork and poultry, is not a large contributor to global warming.

The goal of the study was to establish baseline measures that the U.S. beef industry can use to explore ways of reducing its environmental footprint and improve sustainability.

“We found that the greenhouse gas emissions in our analysis were not all that different from what other credible studies had shown and were not a significant contributor to long-term global warming,” said ARS agricultural engineer Alan Rotz, who led the analysis team.
The study lasted for 5 years; in 7 regions of cattle production were studied, using 2,270 survey responses and site visits nationwide. The study’s main conclusions are:

Greenhouse Gases (GHG) of beef cattle production in all 7 regions combined accounted for 3.3% of all U.S. GHG emissions. At the same time, transportation and electricity generation together made up 56% of the total in 2016 and agriculture, in general, contributed 9%.
The fossil energy use in cattle production accounted for less than 1% of the total energy consumed nationally.
Cattle only consumed 2.6 pounds of grain per pound of beef cut weight, which was comparable to pork and poultry.
The purpose of the study and analysis was to systematically measure the use of fuel, feed, forage, electricity, water, fertilizer and other inputs to raise beef cattle throughout the country—from birth to slaughter.
Using a computer program called the “Integrated Farm System Model” the team also estimated net releases of reactive forms of nitrogen such as ammonia from manure and urine, as well as the three major greenhouse gases (methane, carbon dioxide, and nitrous oxide).
Two areas for potential improvement are water use and reactive nitrogen losses. Water use is increased in the West where U.S. beef cattle are concentrated. Reactive nitrogen losses (at 1.4 teragrams or 15 percent of the U.S. total) mainly in the form of ammonia can lead to smog, acid rain, and algal blooms, and potentially pose a public health concern.